For those who haven’t been fortunate enough to see a wolverine in the wild, you’ll soon have a chance to view a gulo in a more accessible location – if you’re in Montana, anyway. ZooMontana, in Billings, will open a new wolverine exhibit featuring two Scandinavian wolverines, Sid and Ahmari. Sid is Swedish, Ahmari is from Finland, and you can read more about them, and check out a video, here. There’s additional information here. The opening date of the new wolverine enclosure is not yet certain, but it should occur by the beginning of May.

The Billings Zoo previously had a wolverine, but he passed away in 2012. The new wolverine program is significant because ZooMontana will be participating in an attempt to breed wolverines in captivity – notoriously difficult to do. Will we have the very rare opportunity to observe wolverine kits up close in a few years? Stay tuned. And drop by to say hello to Ahmari and Sid if you’re in Billings.

Just for fun, here’s a picture-laden article about the kits born earlier this year at the Cotswold Wildlife Park in the UK. This article was published back in April, as the kits emerged from the den, but the piece escaped my notice. It’s worth a look now. Thanks to Tim Jahraus for bringing this to my attention.

Around Easter, a group of pre-schoolers from Billings, Montana, gathered to partake in a peculiar  ritual: they spent the day making pinatas for the animals at the Billings Zoo. It’s peculiar, of course, because what is a wild animal supposed to do with a pinata? But it’s also touching, because it speaks to the fact that someone out there is thinking about these animals in very human terms, and recognizing that they too sometimes crave some entertainment, something out of the ordinary. An animal in the wild is unlikely to encounter a pinata, but it certainly has opportunities for play and exploration that zoo animals lack. The pre-schoolers’ pinatas – a tradition repeated every holiday – are a rough compromise between captivity and the unfettered wild.

The pinatas were stuffed with treats according to the type of animal – fruit and vegetables for the bear, meat for the tigers. Among the other animals, a familiar character put in an appearance: “Some animals use the pinatas as houses. Others, like the wolverine, just rip it to shreds.”

The pinata-shredding wolverine, whose name is Cass, will be a feature at an upcoming showing of Wolverine: Chasing the Phantom at the Billings Zoo on May 20th.  Film producer Gianna Savoie and Cass’ keeper will be among the wolverine-knowledgeable people on hand to help celebrate the wolverine. The film showing honors Endangered Species Day and – perhaps – the wolverine’s new, almost endangered, status. Details are available below, or at the Billings Zoo website.

The poster features F5 of the Glacier Project. The daughter of the famous F4, F5 scaled Bearhat Mountain in the dead of winter for no reason that anyone can determine, other than the sheer adventure of getting to the top. She later died in an avalanche.

If zoo animals shredding pinatas aren’t enough for you, you can head east from Billings; the Detroit zoo regularly supplies its animals with specialty pizzas as part of a program to provide entertainment to the zoo’s denizens, and offer inner city kids the chance to visit the zoo. Detroit has two wolverines, a male, Jigi, and a female, Luka. In case you ever find yourself taking a pair of hungry wolverines to an Italian restaurant, check the menu for a peanut-butter-honey-sardine-raw-meat-and-bones combo. Yum. The zoo keeper describes the two wolverines  eyeing each other’s pizzas before settling for their own: “Whatever they have, the other one is always better. They’re just like kids.” 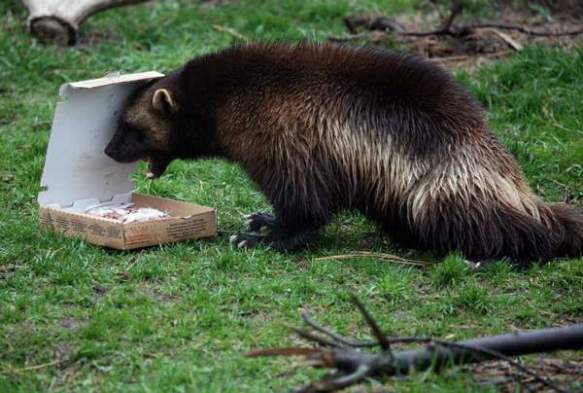 Finally, another important graphic: a shot of snow cover across the US from earlier today. Winter in the Rockies has been ferocious this year, and as this graphic demonstrates, most of the snow on the ground is over five feet deep. It’s been a good year for wolverine denning conditions.

Valentine’s Day and Mother’s Day are the bookends of the wolverine denning period, and this is the week that wolverine kits around the globe are emerging from their snowbound existence and heading out into the wider world. F3, our female in the Absarokas, was thought to be in a den as of flights in late April. Last weekend, a field team went in to investigate the site and determine whether she had actually given birth or, as per her notorious reputation, was fooling us once again. I really despise cliffhanger journalism, but the topic deserves a post of its own. So check back later this week for the story of what the team discovered.