In January and February of 2009, I spent a few weekends tracking a wolverine on Togwotee Pass, just north of Jackson, Wyoming. The days were short, the terrain was challenging, my fingers froze every time I pulled out the telemetry unit. I never found him. This wolverine, who we refer to as the Lava Male but whose official designation is M56, was captured and instrumented by the Wildlife Conservation Society (WCS) wolverine project at Lava Lake, just outside of Grand Teton National Park, in December of 2008. He was a young male, most likely at the age where he needed to find his own territory or else get beaten up or killed by the resident male in the territory where he was born. WCS had briefly shared monitoring duties for M56 with the Absaroka Beartooth Project while they focused on their research sites in Montana. My experiences on Togwotee Pass were not part of any official plan; I was simply trying to reach the area where the telemetry flights had picked him up. I went out three times, and was never successful.

In late February, after rocketing between Togwotee Pass and Dubois, the Lava Male disappeared from the radioscape. There are plenty of things that can kill a wolverine in the wild, but wolverines also move fast enough to be in totally unexpected places between one weekly telemetry flight and the next. I suffered a few twinges of anxiety, but not too many, and we weren’t surprised to hear that he’d turned up at the south end of the Wind River Range, a straight-line distance of over 100 miles. Then he disappeared again, this time for a longer stretch, before reappearing in April just north of Rawlins, another 100 miles south of his last location. The area around Rawlins is flat, dry, and full of cattle, the antithesis of ideal wolverine habitat. It’s also  barely 90 miles north of the Colorado border – and the last confirmed sighting of a wolverine in Colorado dates back to 1919. M56’s wanderings had taken him through much of the suitable wolverine habitat in Wyoming, and he hadn’t stopped for long in any of it. The next closest potential habitat was in Rocky Mountain National Park.  Suddenly the Lava Male’s adolescent peregrinations had the potential to become very big news.

The big obstacle, the thing that made me catch my breath in concern every time I thought about it, was I-80, which slices across all of southern Wyoming and which the Lava Male would have to cross if he truly was aiming for Colorado. In mid-May, when I left Jackson to drive across the country, I cringed every time I passed roadkill on the Wyoming portion of I-80. Flattened badgers made me break out in a cold sweat – I was sure I was finally going to see the elusive Lava Male, in a very unhappy situation.  Still, I could see that they were badgers, and from the interstate I could also see snow-capped mountains rising to the south. It was the only logical place for him to go, and I didn’t think he’d been squashed yet. Hope remained.

Sometime in the dead of night on Memorial Day weekend – in fact, before I cringed my way along the interstate – the Lava Male  made it across I-80. About a week later, he crossed the border, at least 290 miles in a straight line from where he’d been caught in December – and in fact, he’d actually traveled more than 500 miles, zig-zagging across Wyoming before reaching the border. For him, of course, the Colorado border wasn’t a border at all – just the spine of another mountain range. For the humans who keep track of these animals, it is a border, and that potentially means a whole new set of questions and logistical challenges, policy work and social approaches and interagency relationships. A young dispersing male of any wide-ranging species is not the same thing as a resident population, so none of these complications are inevitable, but young males are frequently the vanguard of territorial expansion, and female wolverines are just as tough and nearly as wide-ranging as males. And as epic as the Lava Male’s trip has been, it’s standard for wolverines to move fast over long distances. Considering the persistent unconfirmed reports of wolverine in the Colorado Rockies over many decades, and the fact that the wolverine research community only instrument a certain percentage of the overall population, it’s possible that wolverine have done this before, and that the Lava Male may find that he’s not a lonely pioneer in a wolverine-less landscape after all. Following him over the next few months may provide some insight into this question, as well as a number of other issues important to landscape-scale management of the species. 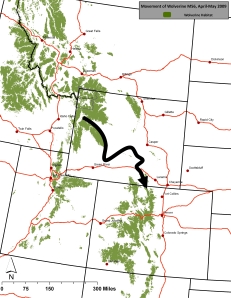 WCS’ article on this wolverine : http://www.wcs.org/new-and-noteworthy/wolverine-returns-to-colorado.aspx

1 thought on “The Lava Male Marathon”